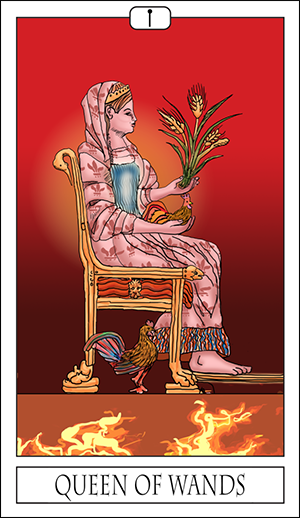 The Queen of Wands is the Watery part of fire. The kind of mastery represented by the Queen of Wands is self knowledge. She’s represented here by Persephone, queen of the underworld, who began to know herself when she willingly entered, or was captured and taken to the underworld. She became the queen of the other world, ruling over it till she returned to our world, bringing the spring with its burgeoning greenery and flowers. She holds her companion the rooster, who sounds the end of the darkness of night, and the beginning of day. Persephone knows herself by being willing to spend time in both darkness and light.