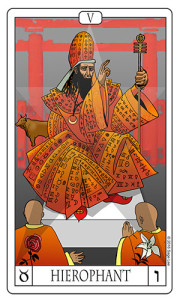 Overview:
The Hierophant is a spiritual teacher, but an archetype like no other spiritual teacher. His feet are firmly on the ground. He translates directly from the divine, by listening carefully, and being patient and kind. His ego is not involved in the choices he makes, and even though he is listening to the divine, like the high priestess, he represents an added ability to make himself understood to his students. He doesn’t just present information without care to how it is received. He does everything with an acute awareness of his responsibility to communicate what is coming from the divine plane.

The Hierophant sits in front of the Torii GateTori gate, symbol of the entrance into the sacred. He carries a scepter or wand to signify not power through dignity, but through the truth which is from good. His adepts wear the saffron robes of devotion, one with a rose on his or her robe, and the other with a lily. This represents the whole of life, from birth to death. The hierophant’s robe is covered with symbols from many different languages, astrology, alchemy, number systems, and symbols from ancient cultures. He has the world’s knowledge available and present to him at all times, yet he listens to divine guidance through his ear that is covered. His simple shoes indicate that despite his position on the platform, he is a simple and humble teacher.

Taurus is the second sign in the zodiac, representing cardinal earth. Not many animals could represent the rock steady earth than the bull, which is its symbol. The age of Taurus on the earth spanned from about 4000 to 2000 BCE, the time of the Sumerians and Egyptians. The moon—there is a moon pendant around the neck of the hierophant—is exalted in Taurus which means that the qualities of the moon (depth of emotion) are expressed in the highest degree. Patience is the greatest gift of Taurus.

Unique to this card are the Torii Gate, the symbol-rich robe, and the unusual staff. The Torii Gate represents the entrance to the sacred. This teacher is on the human side of the gate, but it is present and alive.

Signals from the sacred world are passing from it into the human world continually, and he is there at the entrance to interpret, shape, and speak them in human voice. His robe

The staff is modeled on the Egyptian “tcham” scepter. A staff in the original Egyptian meant that which was leaned upon for support. Translated into the spiritual world, this support is affected through truth and good.

THE HIEROPHANT As an archetype, the Hierophant is a spiritual teacher in the context of family. He helps you make decisions in your business and…