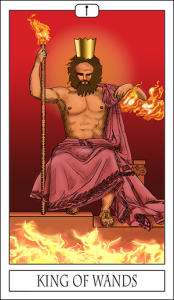 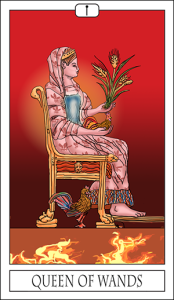 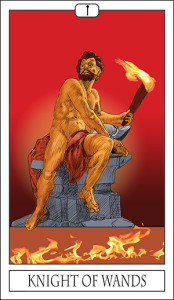 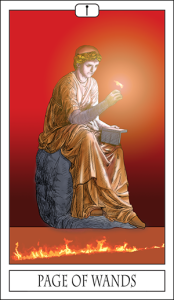 Each of the royal families in the Sage Tarot Deck can function alone, but they also function as a group, and elements in the group inform us about qualities and characteristics of the suite.

The suite of wands is the first one we’ll cover, because it is the suite associated with the first letter of the tetragrammaton. The Tetragrammaton (meaning 4 letters) is represented by the hebrew letters Yod, Heh, Vav, and Heh. This is one of the names of God, said by some to be too sacred to be spoken. The tetragrammaton contains the key of manifestation. Therefore, we’ll be looking at how each royal family according to it’s role in manifestation.

Table 1, below, shows some of the correspondences with the suite of wands. The red background is common to all the wands royalty, as is the fire that can be seen at the bottom of the card. Greek gods are used to represent the royalty for the wands because the ancient Greek culture was seminal in the formation of ideas and feelings about the inspiration of spirit. In the ancient Greek world, the gods and goddesses actually walked among humans. This makes the Greek gods ideal for the Suite of wands.

Table 1: Correspondences of the suite of wands

Zeus is the god sitting on the throne of the king of wands. His Large forehead, his crown and his exposed foot show us his association with the astrological signs Aires and Pisces. Since he is the firey part of fire, fire appears at the top of his staff, at his feet, and is the very cushion he leans upon. Zeus was the god who was the father of so many gods and demi-gods. He got around sexually, generating children everywhere. He is the master of Visionary Living.

Persephone is the Goddess who is sitting on the throne of the queen of wands. As goddess of the underworld she has dominion over all the animals and humans in the underworld. Instead of holding a wand, or torch, she holds a sheaf of wheat, an indicator of what occurs when the fire of the sun meets the water of rain in the field. Her body parts are the stomach and spine. She sits upright on her throne and is surrounded by sustenance, wheat, and the meat from the chickens that sit at her feet and on her lap. Persephone, in her persona of Koré is the one who brings the springtime. It’s actually her mother Demeter who allows the flowers to bloom and the crops to grow when Persephone comes up from the underworld. Her dress is decorated with the fleur-de-lis design, a stylized European lily. The lily is traditionally the plant symbolizing death. The queen of wands asks us to understand that death is a paradox, and is linked with life, even creates it. The queen of wands is the mastery of self-knowledge, because she is familiar with all the darkness of the underworld as well as the light of this world.

The greek god Haiphestos (sometimes spelled Haphaestus) is the knight of wands. He was once a suitor to Persephone, but was rejected by her mother Demeter, but was later married to the goddess of desire, Aphrodite. His body parts are the genitals and thighs, and he was known as “the great artificer” or maker of art, because of his ability to turn molten metal into swords and objects of art. He is the master of Art, or inspired creative action.

The greek goddess Caliope, said to be the wisest and most assertive of the muses. She was said to have the most beautiful voice, and in the Sage Tarot deck, she holds a small torch while pausing from either reading or writing in the book on her knee. She was the mother of Orpheus, and was said to be the inspirer of Homer’s Iliad and Odyssey. She is the master of ecstatic harmony and eloquence.

If you line up all the cards you’ll see some interesting features. First of all, the fire seems bigger at the feet of Zeus, and gets smaller and smaller, till it’s a very small line of flame on the page of wands’ card. What if the scale was set so that, instead of the fire getting smaller in the cards, that it was the same size, and instead of the fire getting smaller, as the flame moves right, the characters were instead getting larger. That would make Zeus the smallest figure, and Calliope the largest. It also may mean that her torch and Haiphestos’ torch might be close to the same size. What would this mean about the relationship of the leader of the gods to his inspiration, and what would it mean about the relationship of all the royalty in the suite of wands?

Table 3: The Royalty on the Tree of Life 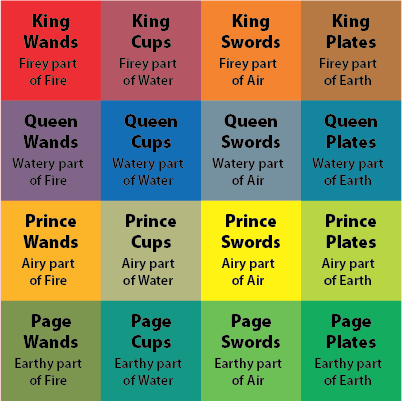 My next few posts will deal with the questions you might ask if you draw the wands royalty in a spread.

Categories: Card for the Day, Royalty

Overview: The strength card is a card of balanced strength. Feminine and masculine strength in the form of the woman and the lion are equally…