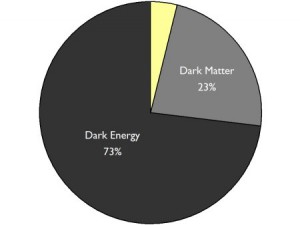 On the cutting edge of science, reality shifts and turns, creating a universe of magic. Remember that magic is technology we don’t understand.

So let’s talk about the magical stuff of which the universe is made. At the turn of this century, several significant scientific projects were launched whose aim was to measure the cosmic background radiation left over from the Big Bang. Among them is the map of the universe made over four years by the Planck Satellite launched by the European Space Agency (ESA).

What they found was shocking. Regular matter and energy–in other words, everything we can detect–makes up only about 4% of the universe. The rest of the universe is made of Dark Matter, which we cannot see, and Dark Energy, which we cannot see. Admittedly, this was not solely discovered by the data from the Planck satellite. This realization was dawning on scientists for a while. Without this large amount of invisible matter and energy, their formulas used to explain the universe and its behavior simply would not work.

There are also other anomalies in our observed universe. Here is an experiment voted “the most beautiful experiment in physics” by the readers of Physics World magazine. A series of photons, or particles of light, are fired through a metal plate with two slits in it. A photographic plate records what comes through the slits. The question is “how does light behave in these circumstances?”

If one neglects to observe which slit a photon passes through, it produces an interference pattern on the photographic plate, suggesting that it behaves as a wave by traveling through both slits at once. But, if one chooses to observe the slits, the interference pattern disappears, and each photon travels through only one of the slits. This experiment lays out, quite simply, one of the most vexing paradoxes in quantum physics.

This experiment ultimately shows just how profoundly our reality is shifted, simply by observing it.

Our understanding of science is breaking through. Not breaking down, but breaking through to a new paradigm. Please understand that reality is the way it has always been. Only our understanding of it changes through the series of models we apply to it through the ages. Ironically, based on the rules laid out in each system of observation, the systems all still work. Newtonian physics, Relativity and quantum physics all work according to their own rules. See the excellent book by Thomas Kuhn on this called The Structure of Scientific Revolutions.

All this is very interesting, but what does it have to do with magic and The School For Wizards? The history of metaphysical or psychical research is filled with phenomena that we can witness, but not explain, much like the double slit experiment, above. If you doubt this, please look a the work of Charles Fort, or Check out the excellent Webinar that we did called “How to change the nature of reality itself.” Reality, as it turns out, rarely operates on the schedule or structure that we have laid out for it. Witness the well-documented—yet still discounted—phenomenon of Spontaneous Human Combustion if you have any doubts. This is just one of many documented phenomena of the same type that are denied or elided by science.

The question for you, as a wizard, is this: What is the universe doing while you are not looking? The “beautiful experiment” above shows that a single photon of light has the capability to completely change its makeup from a particle to a wave while we look away.

There’s something our noses are bumping up against. We bump up against it so many times that our noses surely must be sore, and it’s beyond our ken so we can’t really see it anyway. We have the opportunity to say “wow, something’s happening here,” but instead we deny, explain away, or just ignore the ways the world is not following the rule book we have set up for it. As a side note, scientists are beginning to explore evidence that the speed of light may not be constant. Treated as a constant on which many physics formulas depend, this may mean once again changing, not the nature of reality, but the nature of our understanding of it.

It’s almost rule-number-one for a wizard: Things are not as they seem. Our model of reality is just that, a model. And a model that slip slides along the road like a photon through a double slit. See the School for Wizards newsletter for the piece of magic that uses this dark energy and matter to create something. Understanding this makes doing the impossible more possible.