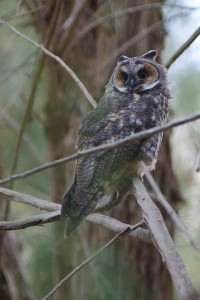 Many of you know that I have a special relationship with birds. Here’s another “feather” in the bird-man cap. Pardon the pun.

We arrive at beautiful Mercey Hot Springs and take campsite E-5. It’s the group campsite, our favorite, because there is plenty of room for our single tent in the canopy of the Melaleuca trees, and plenty of privacy. At nightfall, the disturbing cries begin. It sounds like a small to mid-sized mammal in distress. It’s coming from the trees above us. We shine a light into the branches, but we can’t see anything.

Ed feels the brush of wings on his face.

The screeching calls continue through the night. Mystery not solved.

In the morning we see them, seven of them in all, smallish, lanky owls with feather tufts coming out of their heads.

Later, we find out they are the endangered long-eared owl, Asio Otis. Usually secretive and difficult to find, ours seen anything but. In their preparation to sleep, as they do during the day, they groom each other. One wants his head scratched and presents the top of his head to another there’s a gentle scratching from the larger owl, and they spot us. Instead of spreading their wings and feathers in a defensive display, they look at us with curiosity, and stare at us while turning their heads upside-down on very mobile necks.

We watch them doing something that birder’s call “branching,” which is the technical term for owls hanging out on branches in a tree. That night we see them as they wake up doing a funny head-bobbing motion to each other as well as—apparently—to potential prey. We see them spread their lanky wings and fly from one low branch to another. This is the brushing wing that Ed had felt against his face the night before. The plaintive, repetitive calls start again, and I sit in a camp chair listening to them till I can hear the differences in the voices of the three near me.

I listen to them till I sleep. When I wake I can only find one of them in the branches, but the animals who have hidden from the owl death squad come out. The ground squirrel stretches his little arms and prepares a dust bath. The fence lizard’s do push-ups on little rocks and the cottontail rabbits hop through the shade canopy again as the now-blind owls ”branch” above. I feel the tent flaps of creation have opened up and revealed truth about how life is supposed to work. Everything is in it’s place everything is functioning at its highest. And if I just sit still, the lessons will come to me then, and only then, do I take action.

Most people either don’t bother to carefully observe the lessons from nature, or just stop there, expecting the universe to deliver to them while they eat bonbons and sip cognac. The universe rewards our actions, but not our senseless actions. Look to nature for your lessons. Maybe not all of them, but most of them. There is a world of wisdom that is waiting for you to access it. Why not now? 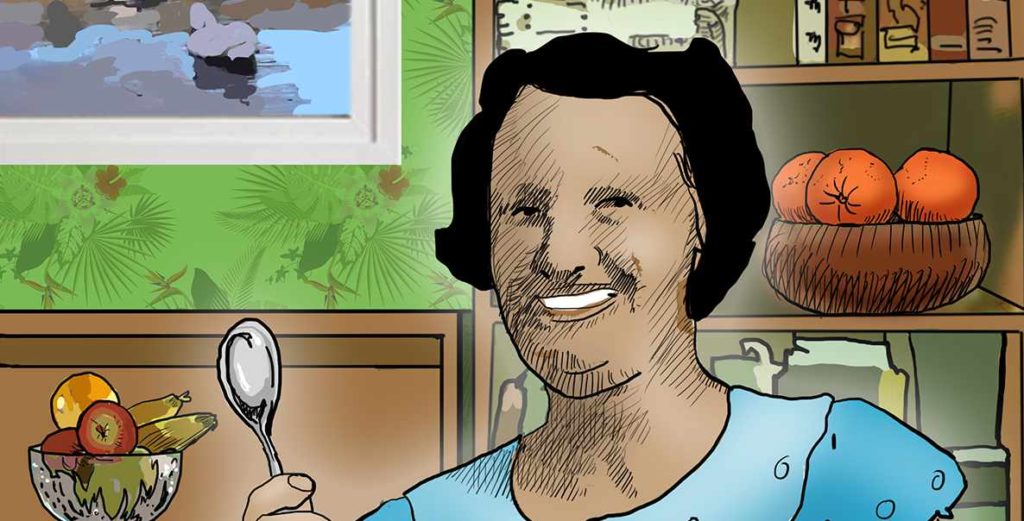 Good morning. I chose the queen of cups again today. My original posting from the Queen of Cups is in the next two paragraphs, and…