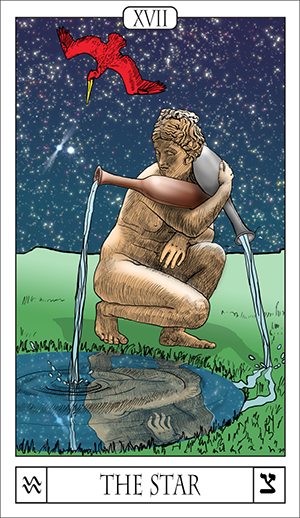 Finally some relief. After life’s whiz banging clanging, we need the soothing calm of this water carrier to calm our jangled nerves. The Star, here in the form of Aphrodite, presides over the pouring of water from the jugs she effortlessly holds in one arm. A star-filled sky fills the background, while the pool reflects her soft, naked (vulnerable) body. A red ibis dives behind her. Perhaps it’s going to dive into the pond before us, or some larger body of water.

The question the star begs is “Are you willing to just be in the calmness and glow of the moment? Can you accept your new good luck?”

In our busy lives, we can often fail to see when there is a calm and sacred moment that has actually arrived. Let the Star allow you to recognize that moment of calm when it arrives, and remember it so you recognize it when it comes again.

While Aquarius is the water bearer, it is actually the cardinal air sign, associated as in all air signs with thinking and intellectual pursuits. All the other cardinal signs of the zodiac are represented by animals. Aquarius is represented by a human being. The ancient Babylonians had a story associated with this god. Gilgamesh had a friend who died, and whom he really wanted to have back. Utnapishtim (the Babylonian form of Aquarius) had eternal life, and was the keeper of the herb of immortality, which Gilgamesh wanted to save his friend. In the end, Gilgamesh could not keep the herb of immortality because humans are not ready to attain immortality.

The star field pictured on this card is a picture of the Capodimonte Deep Field, a 1 by 1 degree deep look into the night sky, where more than 35,000 objects have been found; the faintest are nearly 100 million times fainter than what can be perceived with the unaided eye in the dark sky. In this same way, you can be calm, stay in one place, and discover thousands of things that may not have occurred to you while you were being “busy.”

Finally some relief. After life’s whiz banging clanging, we need the soothing calm of this water carrier to calm our jangled nerves. The Star, here…