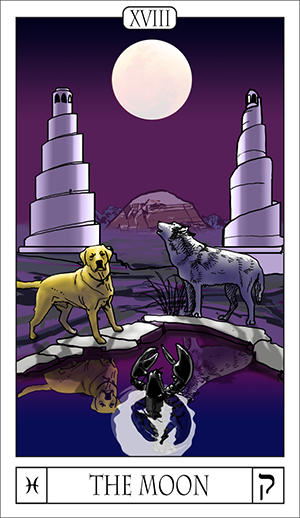 A black lobster peeks out from a clear reflecting pond. A domestic dog and a wolf stand at the edge of the pond. In the distance, two spiral towers guard the sacred mountain in the distance. Going this distance will require energy from you. Beyond the gateway of the towers, Mount Kailash beckons. Kailash, the most venerated holy place in the world and the least visited. It is also the mountain in Tibet whose circumnavigation will win you a ticket out of one lifetime of karma. The Hindus believe it to be the home of Lord Shiva, a god who personifies the extremes of human nature. The moon also beckons us into the extremes found in the collective unconscious. Indeed this unknown territory can be alarming, and even disturbing, but need not be treacherous.

Here is the link to the Moon puzzle online. It will help your study of the card to put together this online puzzle (and it’s fun, too.): https://theschoolforwizards.com/the-moon-puzzle

In much of the world, the number 18 is associated with maturation. At 18, in the United States, one can vote, and in many states, drinking of alcoholic beverages is also allowed at 18. It is the age of emancipation.

When Eight and 1, are added together, the sum is 9, the number of the hermit. The practices of the hermit—asceticism, frugality, focus, walking in balance with the natural world—can offer us a way to deal with the moonscape we are confronted with in the moon card. The moon offers us something very different, and very deep, and the hermit can help us experience and assimilate that experience..

Piscean energy is often considered to be “otherworldly” or “spaced out”. People born collectively under the sign of Pisces, associated with the sea deity Neptune, often have one foot in the collective unconscious, and are artists and mystics. Because Pisces is the last symbol of the zodiac, it’s often said to contain all of the last 12. This can be confusing to the poor Pisces, but it give to this sign and archetype the ability to look within and answer from the heart.

The Spiral towers, unique to this card, remind us that all of life happens in a circle which is really a spiral. We may come to the same emotional crossroads, the memory of the death of a loved one, or recurring negative life-patterns, but we are not “full circle”. If we are doing our work, when we return again, we are at a place above it, just like the climb up the tower. And each time we reach a higher place on the tower, we have greater perspective.

A black lobster peeks out from a clear reflecting pond. A domestic dog and a wolf stand at the edge of the pond. In the…

Sometimes the answer to your most vexing problems in life or business comes down to the elements found in the moon card. Like the other…