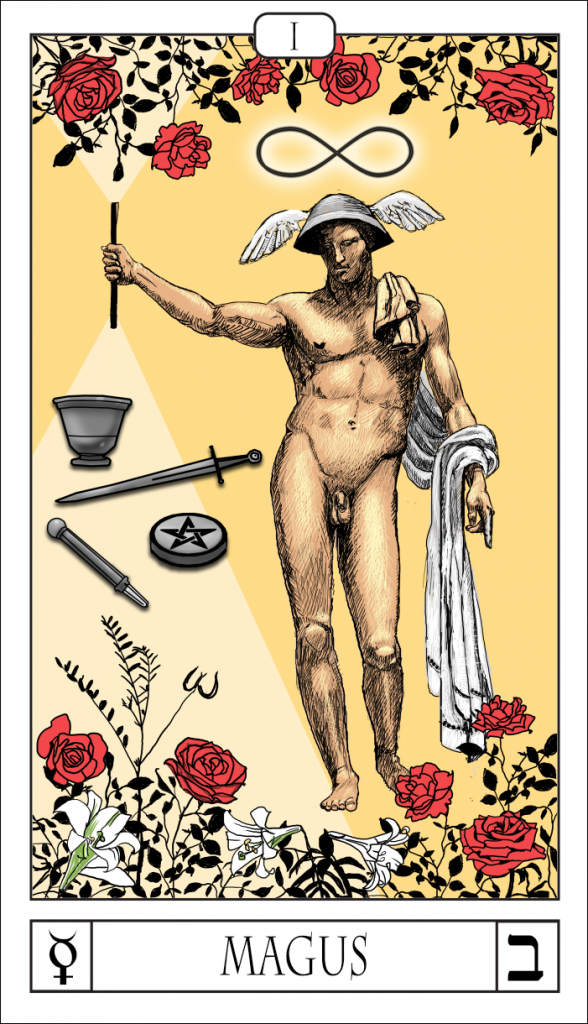 The Magus, in this card, based on the Greek statue of the Hermes—originally from the school of Praxiteles in the 4th century BCE— is the messenger of the Gods. His winged helmet indicates that he can move easily between the divine and mundane worlds. He holds a wand in his hand, and the wand points to heaven on one end, and the earth on the other, indicating the principle “As above, so below.”

The five roses indicate the five senses, below in the world, and above in their divine forms. Death, in the form of the lilies below, is present in the world below, but not in the world above.

Floating below the wand are the wand, sword, cup, and plate that indicate the elements of fire, air, water and earth respectively, which the Magus, or Magus has control over.

The idea of the one and only, the ego, the sense of self, our oneness, our sense of wholeness are all associated with the number one. In the process of involution, the soul (represented by the Fool), is embodied into the ego or personality (represented by the Magus) and goes from being everywhere always into perceiving itself to being one being or one self.

Mercury is the smallest planet and nearest to the Sun. Mercury is linked with the rational mind, and with our sense of spiritual direction. Mercury, and gods like him in the Babylonian and Egyptian systems is known as the scribe of the gods. The god representing Mercury in the Egyptian system is the god Thoth, who aside from being the scribe and communicator of the gods, also knew the names of all things.

When we say “mercurial” we mean something that quickly and easily changes, and that’s true not only of the god Mercury, but of the ego as well.

Mercury is also often associated with healing. The Staff of Mercury is the Caduceus, used as a symbol for medicine, even in the twenty-first century.

The Magus is naked here instead of clothed, and his nakedness indicates that, even though the Magus has many powers, he is still like an infant, learning what the world is about, and yet has his drape nearby, so he can protect himself from the elements when the time is right.

The Magus, in this card, based on the Greek statue of the Hermes—originally from the school of Praxiteles in the 4th century BCE— is the…

The fool drifts through space unconcerned and weightless (without care). Accompanying him are a dog, a walking staff, a suitcase, a cap, and a feather.…