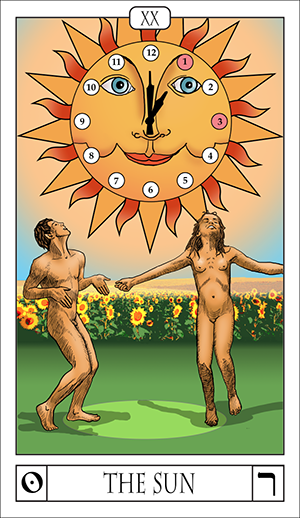 The Sun Card is a card of integration and innocence. When this card is chosen in a reading, it can indicate a favorable “light” is shining on your inquiry. It can also mean that something must die in order for something new and bright to emerge. For the adolescent pictured in the card, childhood must give way to adulthood in this transition period  known as adolescence. The sun is about forgiveness, fortitude, the courage of the life force, life itself and the will to exist. When the sun shines on your life and business, it’s astonishingly bright and beautiful. Without the sun, jealousy, envy, apathy can overtake us.

The great sun shines down on two naked pubescent individuals. The young man is in the position of the great dancer Nijinsky in The Afternoon of A Fawn, an event that launched this young dancers career and stirred controversy because of its supposed inappropriate content. In fact, the dancer never appeared on stage naked and the inappropriateness was mostly in the minds of the observers when faced with a view into the natural world that they had never before experienced.

The Sun shines down with the face of Grandfather Clock from the long-running American television show for children, Captain Kangaroo. In the show, grandfather clock would be awakened from a deep sleep to dispense wisdom, and then return to sleep, much like the sleeping wisdom inside us that is at our own beck and call when we are balanced enough to witness and understand it.
One foot of each young person is inside the circle of green at the bottom, and one foot is outside, indicating that they are  balanced internally and externally.A field of sunflowers fills every foot of space behind them, stretching as far as the eye can see. So it is with the domain of the sun, whose light covers the planet.