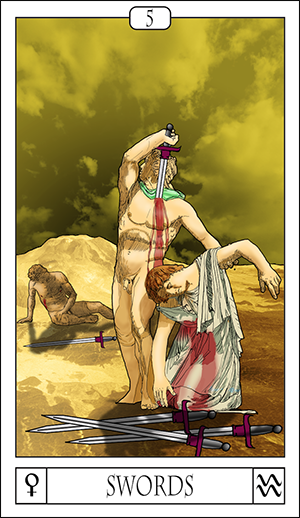 The images in this card are based on the Helenistic Greek sculptures “Gaulish Chieftan Killing Himself and His Wife”, and “The Dying Gaul”. The man in the foreground is killing himself after killing his wife, and the figure in the background is slumping, defeated. All but one of the swords lay on the ground before the figures.

This is traditionally the card of defeat. The thing to notice here is that there are several forms of defeat. Self defeat is the defeat of the Gaulish Chieftain. He’s given up hope and defeated himself, killing himself. The Defeat of the woman is the defeat of letting yourself be defeated by those who love you, but who do not believe in you. This is the kind of defeat that is insidious, because the energy of defeat is coming from those you trust. We allow ourselves to be stopped before we ever get out the gate. The figure in the background is allowing himself to be defeated by others. He’s fallen in battle trying to defend himself and larger ideals. He crouches on the ground, on the verge of either getting up and making a stand, or breathing his last breath.

When draw this card, you are being asked to notice your relationship with defeat, your own feelings of defeat, loved one’s messages of defeat, or defeat at the hands of an enemy. What is important is not the defeat itself, but how you respond to it.

Uranus in Aquarius. Aquarius is the sign of exploration and curiosity, and Uranus is the higher octave of Venus, the power of love. At the higher octave, Uranus is about your love of community, culture, and higher ideals and structures. In this card, Uranus and Aquarius oppose one another, leading to the focus on defeat.

The images in this card are based on the Helenistic Greek sculptures “Gaulish Chieftan Killing Himself and His Wife”, and “The Dying Gaul”. The man…

This card is based on the paintings of Northern Renaissance artist Marinus Van Reymerswale, whose specialty was painting money lenders and bankers. These are men…