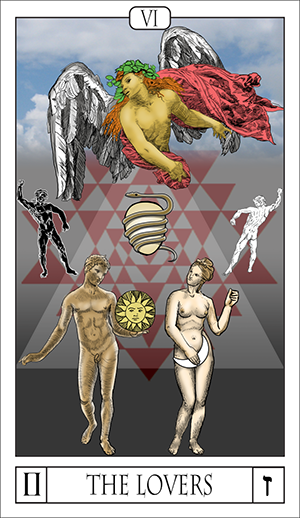 The lovers is not so much about a pair of lovers, but a set of three, hence the sri yantra in the background. The Sri Yantra represents the union of Masculine and Feminine Divine.

The orphic egg is at the center. The orphic egg symbolizes the belief in the Orphic religion that the universe was born from a silver egg. First out of this egg, and described in an ancient hymn, was Dionysus, personification of light (and god of alcohol and spirits).

Raphael wears the red robes and victory wreath of Dionysus as well as the wings of angel Gabriel.

When you draw this card, it means that you are reflecting on the relationship between the masculine and feminine within you, as well as your relationship—in your wholeness— to the divine. In business, it may mean that you need to repair a relationship, make a tough choice in your business, or pay more attention to the divine healing that is always present and trust that it will happen, no matter what occurs on the physical plane.

The Lovers card is the next stop in our journey. You have to understand that this card is not just about lovers, but the relationship…

There are a few archetypes that almost universally upset people. This is one of them. Although, I admit that the devil card from the old…