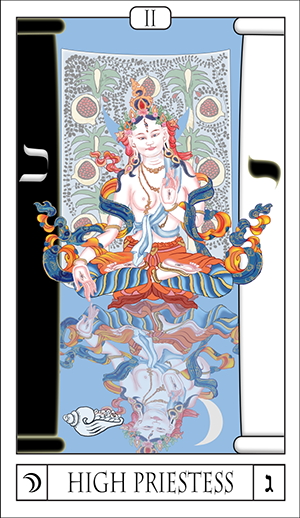 Today we drew the High Priestess, who I call “the librarian of the unconscious”.

The High priestess is an archetypal feminine presence. She’s often represented by the goddess Persephone, because of Persephone’s constant return to the underworld. She is also associated with the triple-goddesses like Hathor and the Sumerian goddess Inana, powerful goddesses who were known in ancient times before they were split into maiden, mother and crone goddesses. She sits in front of the veil that hides the hidden information from the uninitiated. In the process of involution, or ensoulment, she represents the connection to the great collective unconscious.

in the Sage Tarot Deck, the goddess representing the moon is White Tara, the goddess of pure compassion. White Tara is not associated with compassionate acts, but the exalted and divine aspect of compassion, putting her in contact with the great unconscious, and she is the keeper of the akashic records.

For buddhists the conch shell, pictured on the card, represents the  deep, and beautiful sound of buddhist teachings. For hindus, the conch (used as a horn) is one of the representatives of Vishnu, the hindu god of preservation and protection.

You should be getting a taste of the power of the cards by now. The Fool, the Magician, the High Priestess represent the soul, the…

A black lobster peeks out from a clear reflecting pond. A domestic dog and a wolf stand at the edge of the pond. In the…